USAID is working across all sectors to address the unexpected needs brought on by the massive influx of Syrian refugees into Jordan since 2011. In the education sector, USAID is making a significant effort to assist the Ministry of Education (MoE) in addressing the needs of Jordanian students pertaining to overcrowding and double shifting in schools. In addition, Jordan’s Ministry of Health (MoH) reached out to USAID for assistance with the expansion and renovation of health facilities.

The first component of the project focuses on the Jordan School Construction and Rehabilitation Project (JSP), Jordan School Expansion Project (JSEP), Learning Environment: Improved Infrastructure Program (LEIIP), and Schools of Knowledge Economy Project (SKEP). UNOPS main intervention is to furnish and equip up to 120 school expansions and 300 kindergarten classrooms under JSEP, furnish the administration and education rooms for 132 schools under LEIIP, and furnish and equip 25 SKEP schools. The second component of the grant focuses on the Princess Rahma Pediatric Hospital (PRPH) in Irbid governorate, and Al-Bashir hospital in Amman governorate. UNOPS intervention is to equip and furnish the renovated areas in both hospitals upon completion in 2020.

In 2016, based on UNOPS successful partnership with USAID on the schools project, USAID added a health component, further to a request by the Jordanian Ministry of Health (MoH) to assist with furnishing and equipping the expansion of the Princess Rahma Pediatric Hospital (PRPH) in Irbid Governorate. The expansion, with a total built-up area of 5500 Sqm, …

USAID collaborated with the Government of Jordan to expand the maternal, neonatal ICU, and emergency departments at Al Bashir, Jordan’s largest public hospital, to cope with the estimated 25% increase in the population of Jordan. The new 2,000 Sqm. emergency building is estimated to deal with around 50,000 cases per month.

The Learning Environment: Improved Infrastructure Program (LEIIP) is a $35 million project that aims to improve student well‐being and school achievement through enhancing the physical infrastructure of the learning environment. USAID implemented the rehabilitation works for LEIIP schools in full collaboration and partnership with the Ministry of Education through host country contracts with the Ministry of Public Works and Housing.

In April 2014, USAID launched the Jordan School Expansion Project (JSEP). The a five-year $100 million project’s main goal is to expand 120 existing public schools, construct 300 kindergarten classrooms, and rehabilitate 50 sports facilities in the means of improving access to basic education across Jordan and provide an improved learning environment for youth. In 2015, …

In 2016, USAID requested UNOPS to assess 25 schools under the Jordan School Construction and Rehabilitation Program (JSP) and their need for computer labs and general/comprehensive scientific labs. Therefore, UNOPS simultaneously conducted the needs assessments for these school labs and accordingly recommended and provided ICT equipment …

On Tuesday, Chargé d’Affaires, Karen Sasahara and USAID Mission Director Jim Barnhart, were joined by the Minister of Planning and International Cooperation H.E. Dr. Mary Kawar celebrated the inauguration of the newly renovated Jaba Mixed Primary School in Jerash, one of the 130 public schools renovated by local construction firms over the past five years as part of USAID’s partnership with the Ministry of Education and the Ministry of Public Works and Housing.
These renovations resulted in giving almost 40,000 students a year, their teachers, and their principals access to spaces with appropriate lighting, heating, ventilation, and plumbing, all of which are accessible to persons with disabilities.

On Tuesday, Chargé d’Affaires, Karen Sasahara and USAID Mission Director Jim Barnhart, were joined by the Minister of Planning and International Cooperation H.E. Dr. Mary Kawar celebrated the inauguration of the newly renovated Jaba Mixed Primary School in Jerash, one of the 130 public schools renovated by local construction firms over the past five years as part of USAID’s partnership with the Ministry of Education and the Ministry of Public Works and Housing.
These renovations resulted in giving almost 40,000 students a year, their teachers, and their principals access to spaces with appropriate lighting, heating, ventilation, and plumbing, all of which are accessible to persons with disabilities. USAID works with the Ministry of Education to give students access to supportive, inclusive learning environments they need to succeed.

USAID Deputy Assistant Administrator Kerry Pelzman joined HE Dr. @OmarRazzaz to lay the cornerstone of a new emergency department at Jordan’s largest public hospital, Al-Bashir. The new facility will help the hospital meet the health needs of over 50,000 patients each month

On Sunday, House Democratic Leader Nancy Pelosi visited Dahiet Al Ameer Hassan School, one of many schools built by USAID in partnership with the Ministry of Education in order to improve enrollment, reduce overcrowding, and improve the design and quality of learning spaces. The school now accommodates over 2,300 Jordanian and Syrian students, and has played a key role in improving access to quality education for children in a densely populated district of Amman. “The energy & strength of children never fails to amaze me. It was a special privilege to visit this energetic class of young Syrian refugees yesterday in Jordan,” said Nancy Pelosi.

As part of his trip to Jordan, Senator Jack Reed visited the Um Anas Primary Mixed School, where he sat in on lessons given by teachers who received training in reading and math instruction through USAID, which is working to improve 2nd and 3rd grade reading and math instruction for more than 265,000 early-grade students across Jordan. The school has also benefited from USAID/Jordan’s Jordan School Expansion Project, which provides additional classrooms, kindergartens and renovates older schools and facilities.

AMMAN – The new emergency ward at Al Bashir Hospital will start receiving patients in a few weeks, as its expansion has been completed, and a tender has been floated to furnish the ward by the US Agency for International Development (USAID), the Jordan News Agency, Petra, reported.

Minister of Public Works and Housing Falah Omoush and Health Minister Saad Jaber visited on Sunday the new ward, according to Petra.

During the visit, Omoush said that the new ward extends over a 21,000-square-metre area and fits 150 beds, including surgery rooms and an intensive care unit, which will be equipped with state-of-the-art medical devices.

The minister said the expansion came after recurrent visits by His Majesty King Abdullah to the hospital and issuing Royal directives to expand the hospital in order to enhance its efficiency and infrastructure, and address the crowdedness in the main hospital building, Petra reported.

For his part, Jaber said the project was carried out to advance the ambulance services at the hospital under the government’s comprehensive plan to improve emergency wards and expedite the process of receiving patients and diagnosing them.

Jaber said Al Bashir Hospital is “the largest hospital affiliated with the Health Ministry” in term of the number of beds, the medical, nursing, technical and management staff and the number of patients, which reaches over 600,000 patients annually.

The development and maintenance work at the hospital were conducted in three phases, the first of which began in 2002, Jaber said, noting that construction is ongoing at an overall cost of around JD74 million.

He added that the latest expansion project began in July of 2018.

Work on the Emergency Hospital had begun in 2018, following Royal directives to improve medical services and enhance the hospital’s infrastructure and readiness.

During the visit, King Abdullah directed the government to enhance public healthcare services, stressing the importance of expanding health insurance coverage and streamlining procedures for patients, according to a Royal Court statement.

His Majesty toured various wards of the Emergency Hospital, which extends over 22,000 square metres with the capacity of 162 beds, 55 of which are equipped with ventilators in the Intensive Care Unit.

The King, accompanied on the tour by Prime Minister Omar Razzaz, was briefed by Health Minister Saad Jaber on the four-storey Emergency Hospital, which was funded by USAID at a cost of JD21 million, the statement said.

The building includes a helipad for medical evacuation aircraft, and a bridge connecting it to the main Al Bashir Public Hospital.

During the visit, His Majesty also toured the Oncology Ward at Al Bashir Public Hospital, which was rehabilitated at the initiative of the Himmetna voluntary campaign team.

The King commended the partnership and cooperation between private sector institutions and civil society organizations, which culminated in the completion of the Oncology Ward, according to the statement.

Himmetna Executive Director Fadia Samara briefed His Majesty on the rehabilitation process of the ward, which extends over an area of 1,400 square metres, with a 40-bed capacity, noting that the JD1.5 million project was covered through the financial contributions of institutions, companies, and individuals, as well as in-kind donations by suppliers and manufacturers.

In 2018, the team participated in the MEL (MONITORING, EVALUATION AND LEARNING) Conference focusing on ‘Self-Reliance and Sustainability’ and participated in the expo at the same conference, which gave the team the opportunity to meet other implementing partners for USAID and share with them experiences, knowledge, and best practices and showcase UNOPS contribution to the project. 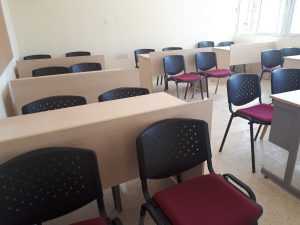 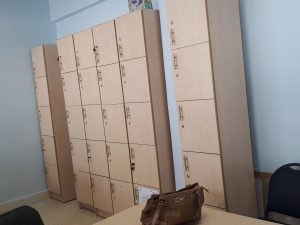 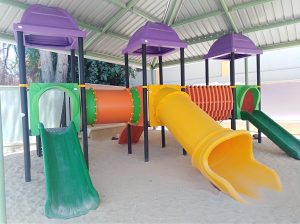 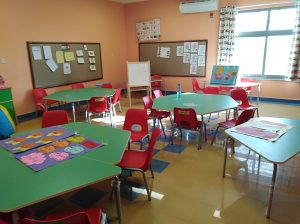 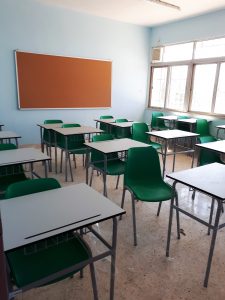 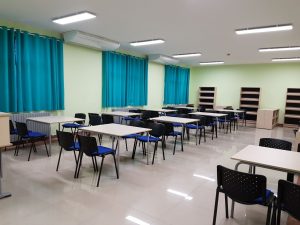 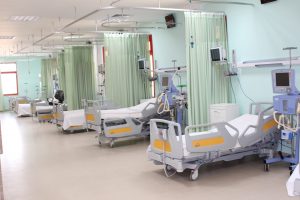 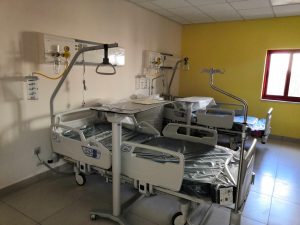 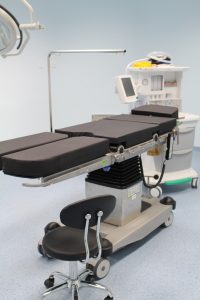 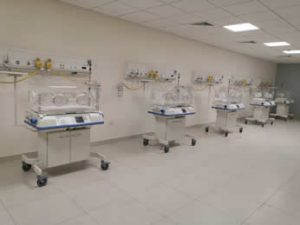 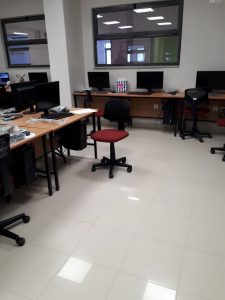 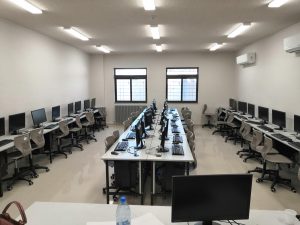